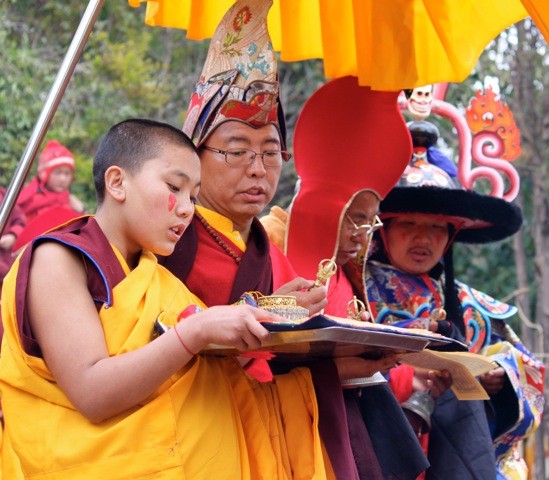 From at least the 12th century, Tibetan nunneries assumed a key role in preserving the dharma in Tibet.  Prior to 1949, there were at least 818 nunneries and approximately 28,000 nuns.  In the years that followed, nunneries were destroyed and some nuns imprisoned, forced into labor camps and tortured.  The devastation to the tradition of the Tsoknyi Lineage and the Nangchen Nuns was so extensive that the lineage was almost extinguished.  In the mid-1980’s, a few surviving nuns began to rebuild and their numbers have grown to over 2,000 strong in Tibet.

Today, obstacles to practice and survival persist, driving nuns from Tibet into more accommodating countries such as Nepal.  The journey out of Tibet is arduous; many of the nuns, ranging in age from pre-teen to old age, arrive penniless, with only the clothes on their backs.  Once the nuns have left Tibet, they receive no familial or community support and are left to fend for themselves in a foreign country.

Five Nangchen Nuns from Tibet made this same journey in 1994, and over time twenty-three Nangchen Nuns arrived in Kathmandu, Nepal. While several of the nuns returned home to Nangchen, Tibet, leading members of the community remained in Nepal and moved to Chobar Hill to help Rinpoche create a home for the Tsoknyi Lineage outside of Tibet. Thanks to the generosity of Tsoknyi Rinpoche, their care was assured and they now form the core of Tsoknyi Gechak Ling, a monastic home in Kathmandu, Nepal where they can practice, study and grow in the Dharma. They have been joined by more nuns from Nepal and currently about 40 nuns and 82 girls live and practice at Tsoknyi Gechak Ling.

A similar story of need and generosity can be told of the Tsoknyi Gargon Ling nunnery high in the Himalayas at Muktinath. From a desperate situation in 1991, hearing of a great Tibetan lama of their own Drukpa Kagyu Lineage, three senior nuns walked hundreds of miles over mountainous terrain to Kathmandu to request the spiritual and material help of Tsoknyi Rinpoche.  Twenty years later, housing, a kitchen, dining hall and a beautiful new Shrine Hall have been constructed.  The October 2011 Consecration of Tsoknyi Gargon Ling was a joyous occasion attended by thousands of villagers, renowned teachers and students of Tsoknyi Rinpoche from around the world.

WHY SUPPORT THE NUNS & PRESERVE THE LINEAGES?

Tsoknyi Rinpoche’s nuns are part of a wisdom tradition long preserved in Tibet. In the 19th century, Tsoknyi Rinpoche the First designed and developed a system of practices for the transformation and enlightenment of female practitioners. He envisioned a time when these women would become among the most accomplished Buddhist practitioners in the world. The expression of Dharma through the female form is important and unique. Qualities such as gentleness, motherly care, and loving energy are quite strong in the female form and very healing for the world.

The true way to preserve the wisdom of the Buddha is through the dharma of realization. This can only be embodied and nurtured through intensive practice. By understanding the nature of reality and embodying the Dharma, the nuns reach realization. Those who support the nuns in this endeavor are supporting a lifeline of realization. By developing his nunneries in Nepal, Rinpoche is increasing opportunities for women to benefit from this precious experience, thereby expanding their capacity to benefit all beings.